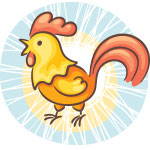 The need for profound communication leads you to reveal private matters and unknown truths about your past. You are not interested in superficial talk. If those around you don't rise up to the challenge, turn your efforts inwards and learn about your own depths.

While the Year of the Rabbit and its focus on your relationships but also on a chance for a personal reset as you reach the halfway point in your current personal 12 year lunar cycle has been underway for two weeks, there is no hurry. This is something that two back to back Rabbit months will allow you to take a deep dive into, but this is still two weeks away. In the meantime, even though the busy, industrious and work focused Year of the Tiger ended two weeks ago, you may find that life is just as busy. That is because the month of the Tiger still has two weeks to run. In the meantime, the first Pig Moon of the Year of the Rabbit will begin over the weekend, with a chance to get the communication lines open.

While the month is likely to get off to a busy start, this is something that you have a chance to transition out of and this will work to your advantage. It was last month that the busy, industrious and work focused Year of the Tiger ended, but rather than coming to an abrupt end this is when the month of the Tiger began. This dialled things down a gear or two without bringing things to a sudden end, allowing you to adjust to the change of pace while keeping the momentum going. By the time the month of the Tiger ends on 20th February you should have found a pace you can sustain for the rest of the year. This is also the point where you can more fully embrace the Year of the Rabbit, which while putting more focus on your relationships also brings you to the halfway point in your current personal 12 year lunar cycle and with it a chance for a major reset.

Colour of the day: Navajo White