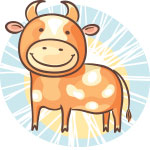 It's a good time for putting your finger on your emotions by turning them into words, even setting them down on paper, so you can stand back and take a second look. You'll find that there are many ways to approach a challenge, but one feels more right than all the others. That's the one to go with, but keep the other arrows in your quiver. Your ability to shift with rapid developments will be a key talent, so stay loose.

Knowing that the Year of the Rabbit has 13 rather than the usual 12 lunar months, that there will be a leap month and that it will run through to February 2024, gives you time to ease yourself into its influence. For the Ox, the Rabbit is the Swizz army knife of any lunar cycle, with a tool for every occasion. The Rabbit makes you smarter, better able to think on your feet, can keep the communication lines open and help you make choices, decisions and plans. You will get a better sense of this when the first of two back to back Rabbit months begins in two weeks. However, already a Goat Moon and its focus on your relationships that ran its course over the weekend has benefited from this.

While the Year of the Rabbit began last month until the New Moon on 20th February ushers in the first of two back to back Rabbit months you are still partially under the influence of the Tiger. The Year of the Tiger did end last month, but the same New Moon that brought it to an end and ushered in the Year of the Rabbit also ushered in the month of the Tiger. The Tiger's focus is more on what you can achieve or attract, not just on the income front but across all the currencies in your life. On the other hand, the Rabbit has a more universal influence and is the Swizz army knife of any lunar cycle. The Rabbit not only makes you smarter and more able to think on your feet, it puts a lot of focus on communication. There isn't an area of your life that won't benefit from the Rabbit's influence. You will get a better feel for this when the month of the Rabbit begins on 20th February.

Colour of the day: Green