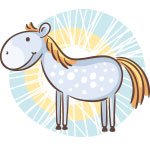 A sense of emotional coolness or detachment at the personal level, combined with an emphasis on idealism: such is the nature of the cycle you are now entering. It's ideas that count for you now, more than narrowly personal concerns - and you may have little tolerance for people who do not operate at this level. The new, the unusual, the avant garde - these are the things that instinctively appeal to you now.

When it comes to the saying 'the old King is dead, long live the King', referring to the transfer of power from one ruler to the next, it seems that the Tiger either didn't get the memo or chose to ignore it. For while last month's New Moon brought the adventurous Year of the Tiger to a close and ushered in the competitive and professionally charged Year of the Rabbit, its influence is still here. However, while the Year of the Tiger did end last month, the same New Moon also ushered in the month of the Tiger, allowing its adventurous influence to live on for another four weeks. This is a chance to transition into the busier and more goal focused Year of the Rabbit and especially as the New Moon on 20th February will not just usher in the month of the Rabbit and but the first of two back to back Rabbit months. A leap month will more than make up for lost time.

Colour of the day: Slate Gray